December 22, 2017
After going through so many winters and paying for snow removal, I had had enough. I had slipped on the patio steps more than once - even once laying right on my back.

I searched Amazon for some heated mats and initially only found products that had really bad reviews.

Then I searched outside of Amazon and found Heat Trak. The reviews looked promising and while the return policy included a 15% restocking fee, I ordered a few just to try them out. If they worked, great - if not, I would only use one and return the others.

Well, no need. Check this out: 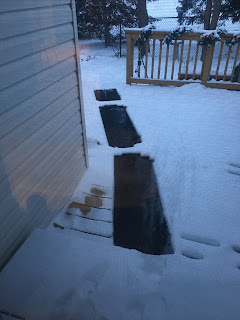 First time we used them, there was no snow but it was cold. We had people over and when they went outside in their socks, they were loving it - no boots needed!!

Then the snow came - sure enough - the mats worked perfectly. It's not instant - 2 inches of snow melts every hour but that's more than enough to get the job down. They aren't THAT expensive either (under $200 for a 5' mat)

Here are some links for Canada:

One caveat, if you buy the mat on its own, it doesn't come with a power supply. So here's the link for the power supply:


We also bought a smaller mat which is perfect for steps or smaller areas -http://amzn.to/2BkCq8A

Here's a link to the company web site - definitely worth checking out. They also have some more industrial mats that are better for driveways but they are a tad expensive (>$1000).

Popular posts from this blog

May 16, 2013
Roofing....everyone needs a roof over their heads. After 18 years, it was time to replace ours. Neighbours in the area were getting it done and there were lots of signs all over the neighbourhood for different companies. Who to choose? We saw their work at another home and had them come in for an estimate. How long does it take to do a roof? With Century Roofing & Siding , our home in Kanata, Ontario (Ottawa area) was done in less than 9 hours!! They were fast, respectful of the environment (with tarps covering the area), efficient and friendly. John Barresi came in to provide an estimate. After measuring extensively, he sat and went through all of the details of the work that would be done. Some companies like to give options - Century doesn't - they say what the job will be and deliver it. They don't skimp on things and in our area, where we get a lot of ice build up and windy weather, this has to be taken into account. He said right up front, we aren't the chea
27 comments
Read more

Ziinga : Not Recommended and here's why

May 01, 2012
Scenario: You buy a product at a Best Buy and the clerk tells you "give us your email and you may win xxxx, we're giving away one a month" - sounds good so you give away your email or phone or whatever. Months go by and eventually you get an email or text message saying "you've won our prize for this month...click here" and it actually refers to Best Buy. Then you get redirected to Ziinga which offers "7 day free registration". Ziinga's offer is very deceptive - here's why. To use Ziinga, you have to buy "bid credits" - which sounds like a great day - $1 a bid but for $50, they'll give you 40 free. Awesome, right? No. When you purchase the credits, you are also signing into their terms of service which says (but only on the receipt AFTER you purchase). " Please be informed that the 7 days free Platinum membership included with this offer gives you exclusive Bid-for-Free auctions, an additional 10% on all bid pa
8 comments
Read more

NOT Recommended: Around the Home Handyman Services

September 28, 2009
Company: Around the Home Handyman - Norm (Norman) Richter - NOT RECOMMENDED This company is NOT Recommended. Here is a link to their BBB listing. Note that the Around the Home BBB rating is not an "A" as noted on other sites. (something I don't usually do here is comment on individual businesses or go on non-technical tirades. This is an exception to the rule - so if you're looking for tech comments, please ignore). On a personal note, I can appreciate people can't work for free these days. It's tough - but any company who offers a one-year guarantee for their work should not be charging for problems with existing work (new work, yes - but work that they originally did? Absolutely not). We have used Around the Home handyman services, owned by Norm Richter (also listed as Norman Richter) for two separate pieces of work: roofing and flooring. The roofing job was done extremely well and on budget. After the flooring work, we will never use them again. T
19 comments
Read more